This is the second Wolf found Dead in Northern California in the last year. It is time to start cuffing and stuffing, and stop letting the killers off with a slap on the wrist! In Wyoming they let a Guide off without even a slap because he claimed he had forgotten where he was at… That particular wolf was killed within a National Parks Borders!

State fish and wildlife officials are investigating the death of an endangered gray wolf found dead in Shasta County on Wednesday.

The 4-year-old wolf was originally part of the Rogue Pack in Southern Oregon and was believed to be about four years old.

California Department of Fish and Wildlife officials did not announce where the wolf was found or the cause of death.

The female, which was outfitted with a radio collar, crossed from Oregon into Siskiyou County in January 2018. Since then she traveled extensively throughout Northern California, covering some 7,600 miles, before she was found dead somewhere in Shasta County.

OR-7 spent time roaming around Northern California, including Shasta County, before returning to Southern Oregon to start the Rogue Pack.

“Like her dad, the famous wolf OR-7 who came to California years ago, OR-54 was a beacon of hope who showed that wolves can return and flourish here. Her death is devastating, no matter the cause,” she said.

OR-54 became famous in her own right, state officials said, noting she traveled farther south than any other known gray wolf.

In September 2019, OR-54 traveled south of Interstate 80 east of Sacramento and entered Nevada, state officials said. But the wolf returned to California the next day and crossed back over I-80, officials said. 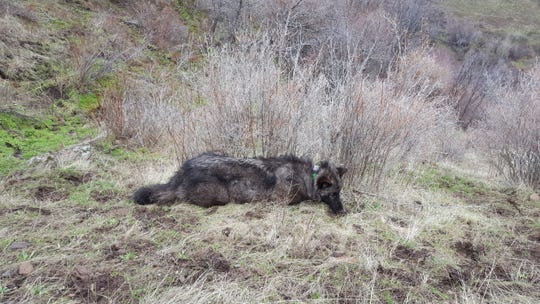 This photo of OR-59 was taken Feb. 9, 2018, when he was sedated and outfitted with a GPS tracking collar. OR-59, an endangered gray wolf, was shot Dec. 5, 2018 in Modoc County. (Photo: Oregon Department of Fish and Wildlife)

“Her travels represent the southernmost known wolf locations in the state since wolves returned to California in 2011,” officials said on the state fish and wildlife website.

State fish and wildlife officials said gray wolves are protected by the federal and state endangered species acts and that killing a wolf is a potential crime.