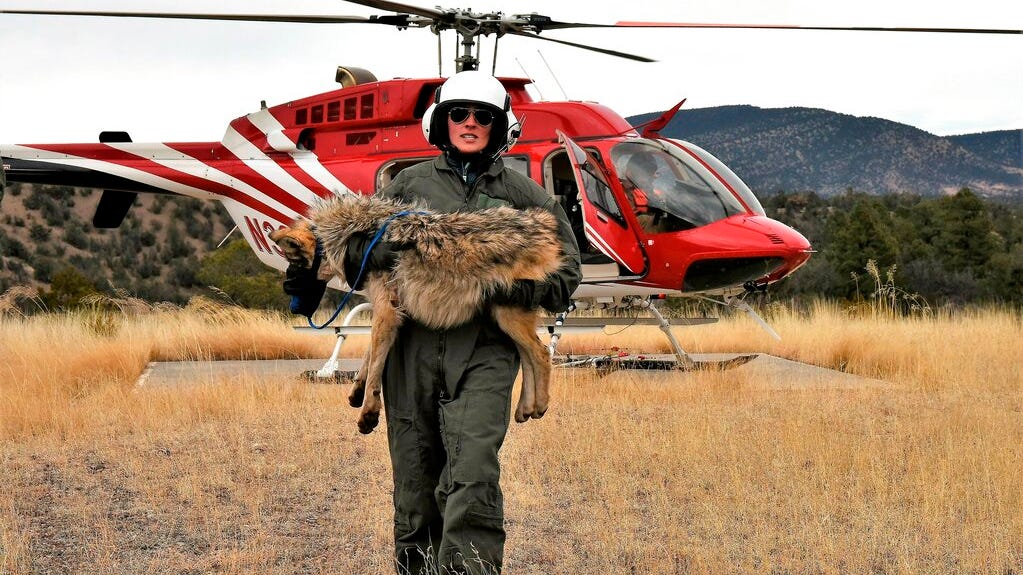 As Soon as Cattle are removed from the equation, great things can happen. The Sooner that all join as 1 Voice to begin making it come to pass, the healthier Our Children’s Resources will become.

What if I told you that this one simple trick could lead to more water, better grazing conditions for Ungulates and healthier, more diverse wildlife? The Public want to see change, then lets begin by getting Our Precedent setting Research into the Courts Today 😉

There is ample research that gray wolves are a keystone species – which means the entire ecosystem rides on their health. Without wolves, grazing species tend to over-eat because they aren’t constantly on guard for the apex predator.

That destroys the diversity of plants in watersheds, which can deplete stream flows (not to mention the quality of grasses and other foods for grazers). It also diminishes the populations and alters the behaviors of other animals, from beetles to eagles to coyotes.

Reintroducing wolves puts everything back in balance.

We’ve seen it happen in Yellowstone National Park. And it’s possible we could see it in Arizona, if we could finally find a way to sustain the Mexican gray wolf population in this state.

But this trick is not at all simple.

Government programs intended to minimize cattle losses nearly decimated the Mexican gray wolf. And decades of efforts to stabilize the subspecies have little to show for them, other than two sides that only seem to dig in deeper as time goes on.

Cattle continue to drive the divide, and understandably so. Though ranchers can be reimbursed for livestock killed by wolves, the federal process is cumbersome. And it doesn’t make ranchers whole for every head of cattle lost – which makes it difficult to embrace in an industry that has so little margin for loss.

Some organizations continue to look for middle ground, urging ranchers to stun, not kill, the wolves that wander nearby, and to pay them for using certain management techniques.

Yet strong voices on both sides continue to argue that wolves and ranching simply cannot coexist.

If it’s not working, why not start over?

Three decades after reintroduction efforts began, 131 Mexican gray wolves live in the wild. Sixty-four were counted in Arizona as of January 2019, according to reporting by The Arizona Republic’s Debra Utacia Krol.

We seem to take a step forward by mating and introducing new wolves, then take a step back when wolves are killed by humans or simply don’t survive, in large part because those in the wild are so horribly inbred.

More than 60 scientists and environmentalists believe the effort is so deeply flawed that they have asked the federal government to start over.

If Mexican gray wolves are indeed a keystone species – we don’t know for certain, though new research suggests they are not wolf-dog hybrids, as some have long contended – their successful reintroduction should have wide-ranging impacts. That includes healthier forests and grasslands, which could boost our water supply and lessen the risk of catastrophic wildfire.

But research also suggests that the wolf subspecies’ DNA is rapidly degrading. Which means if it is a keystone, it may not be one for long.

Given what we could gain from a genetically stable population in the wild, it seems like now is as good a time as any to follow the science and find out.