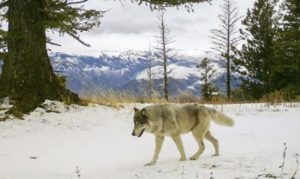 The Washington Department of Fish and Wildlife is asking for your comments on how it should managed endangered gray wolves after they are “recovered” in the state.

WDFW background information and Scoping presentation slides presented at each of its three video conferences and printable PDFs of shareable information about wolf post-recovery planning for public distribution are available here:

All information about the wolf post-recovery planning process is available at wdfw.wa.gov/wolves-post-recovery.

What’s important to know about this issue?

Please send in your comments:

Make them personal as best you can. You can use some of the information above or below.

Tell the Department how you feel personally about this delisting gray wolves.  Delisting has been shown to lead to more wolf killing.

Tell the Department you do NOT want Washington’s wolves delisted and that it’s inappropriate for the Department to pretend a state-listed endangered species that is not close to meeting state recovery objectives is in any way at a sustainable population levels.

What is clear is the Department is bowing to pressure from a small group of special interests who hate wolves. In 2014, WDFW proposed moving wolf management into their Game Management Plan that guides huntable game species.

This is little more than a slight of hand trickery.  Not only is the gray wolf an endangered species, it is a family structured animal.  Wolves are successful hunter only 5 to 10 percent of the time – wolves survive by living family groups.  Even the loss of one member of a wolf family can send the entire family into disarray.

Wolves are not like deer, elk or other hunt-able species.  They should not be listed with other hunted species.  Even more stunning, Department of Fish & Wildlife include in their online survey for the 2015-2017 hunting regulations a category for wolves!

Evidence clearly shows livestock and wolves can coexist – but can humans learn to live in harmony with wolves?  Wolf and livestock conflicts have predominately occurred on public lands and in situations where livestock were not observable and essential indefensible.

Deadline for comments is November 15.  Send your comments to: