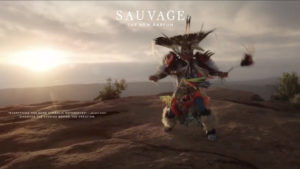 When in fact they should have been thanked.

It is hugely disappointing that some Indigenous found Diors Attempt to create a cultural importance as offensive. It was given the most careful consideration prior to even beginning with a herculean attempt to create a Dialogue between what “Traditional Native Americans hold has Sacred in essence educating the masses as to how sacred that Mother Earth truly is.

Protect The Wolves™  has to question why it is that these so-called Native Americans do not come forward in mass to in fact protect what Traditional Native Americans hold as Sacred like our children’s resources such as Wolves, Bison or our proposed “Sacred Resource Protection Zone” surrounding National Parks.

We find it extremely sad that when we as Native American people are given a gift such this dedication to our heritage and  to show the world who we once were who we should continue to be that Natives then lash out and call it racist because of the name ‘Sauvage’ which was named after a man Percy Savage hence the name ‘Eau’ in 1966 when Dior first introduced the line! Where was your outrage then?

It is in Our Humble Opinion that Dior as well as Johnny Depp and Dior went out of their way to create a Bridge between  what is now know as European Colonization of our Lands and what “WE” Traditional native American Cultural beliefs. https://protectthewolves.com/wp-content/uploads/2019/08/deppssauvage-300×169.jpg #GrayWolves #RestoreWolvesToESL #SacredCulturalBeliefs