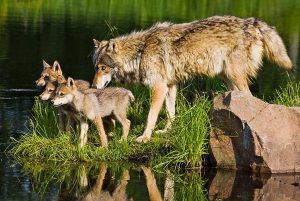 Evidently, the carcass of the wolf found on Dec. 5, 2017, was not from the Smackout pack. It the last known member of the Profanity Peak pack. A female that had been collard back in 2016. Such a tragic and heartbreaking loss. Sadly, no news of the remaining three pups.

Most of us will never forget the brutal slaying of the Profanity Peak pack wolves last year. Seven were gunned down, including a pup by WDFW after Len and Bill McIrvin of the Diamond M. Ranch demanded the entire pack be slaughtered. They had refused to sign and/or abide by the WDFW Cooperative Damage Agreement for compensation. The only deterrent used was a range rider on a vast amount of our public lands—most of which is very rugged terrain. The news was published worldwide and the vast majority was appalled by what had happened.

So the last four Profanity Peak wolves was a female and the three remaining pups and only the adult female was found. We don’t believe the pups survived after seven out of the eleven pack members were killed. The other wolf that was found poached was in  November and also a female. She was the breeding female from the Dirtyshirt pack.

A reward of 20,000 dollars is being offered and climbing for information regarding the two recent poachings. We highly doubt anyone will tell the truth or give information as it is extremely rare. One can only hope the killer/killers are caught but it’s quite obvious that these females were being scoped out and targeted for reasons we can only imagine.

The department encourages anyone who might have relevant information to contact WDFW at 877-933-9847 or 360-902-2936. The illegal killing of a wolf or other endangered fish or wildlife species is a gross misdemeanor, punishable by up to one year in jail and a fine of up to $5,000.

We may need to put pressure on them to do as much as possible to find the killers and not exclude anyone from this investigation. Far too much poaching has taken place in the northwest and we have already lost too many wolves as it is because of some of the ranchers and the department.

A survivor of the Profanity Peak pack, http://protectthewolves.com/wp-content/uploads/2017/12/Profanity-peak-google-images-300×201.jpg